SJI is commemorating its 170th anniversary this year with a series of activities to mark 170 years of Lasallian establishment in Singapore. In 1852, six La Salle Brothers following the footsteps of their Founder, St John Baptist de La Salle, arrived from Europe to provide for the educational needs of the poor in Singapore and Penang, which became their first missionary establishments of the Brothers in the Far East. Reverend Father Jean-Marie Beurel, MEP, a Catholic priest whose vision was to establish Catholic schools in Singapore, initiated the whole endeavour and offered a former chapel for the Brothers to run their school. Within a year, an attap hut had to be erected to accommodate the overflow from the former chapel. On 22 July 1852, St. John's School, as SJI was then called, began as a free school at Bras Basah Road which depended on the support of the public. SJI became the first Catholic school and the third-oldest secondary school to be established in Singapore.
Throughout 2022, the school will be commemorating SJI’s 170th anniversary through a series of year-long celebratory activities. The anniversary is a time for SJI to celebrate our heritage and presence in Singapore as a gift, and for SJI to share our gift of education, our youths and generations of Josephians with the community at large.

The SJI 170th Anniversary logo is designed by Le Hai Long Quan (MN403, Class of 2021) where he aspires to remind Josephians of the Lasallian values of Faith, Service, and Community. Central to the design is the Star of Faith, in Latin “Signum Fidei”. The star is a symbol that guides Josephians through their successes and challenges in life, all of which is part of God’s greater plan. The statue of St John Baptist de La Salle inspires all of us who are part of the educational mission in SJI. It is a reminder of the importance of Service, to always give back to those who have less, especially the poor. A well-intended depiction of human silhouettes is illustrated as four sets of windows, representing the 4 Fraternities of Fintan, Lawrence, Michael and Marcian, which form the SJI Community, a family to which all of us belong. 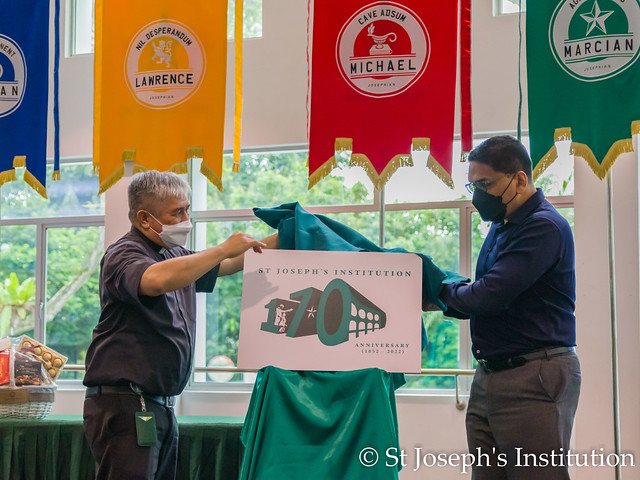 17,000 Good Deeds is an initiative that was launched at the Inaugural Assembly by the SJI Student Council. This initiative aims to provide an opportunity for the school to collectively do 17,000 good deeds to serve the less fortunate and to give back to the community, empowering our youths to become Men and Women for Others. These good deeds can be as simple as helping someone with their studies or lending a helping hand to someone in need done by all students and staff. Since its initiation, 360 good deeds have been performed to date (as of 28 February 2022). This project will officially close at Thanksgiving Assembly on 28 October 2022.

As part of our commemoration of the 170th Anniversary as well as the observance of Lent, SJI is embarking on the SJI 170 Lent Project and Virtual Walk-Run, which aims to raise the social consciousness of students by encouraging them to share with those who are less fortunate and in need.


From 2 March (Ash Wednesday) to 2 June, each student is invited to secure a monetary pledge from donors to contribute to Canossaville, a Catholic social service agency that supports the learning of children with hearing loss. In return, the student will pledge to take part in the SJI Challenge – For every $10 raised, the student will run 1km. Donors can pledge their donations at https://www.giving.sg/campaigns/sji-supports-canossaville.